Blue Lotus of the Nile: The Narcotic Lily 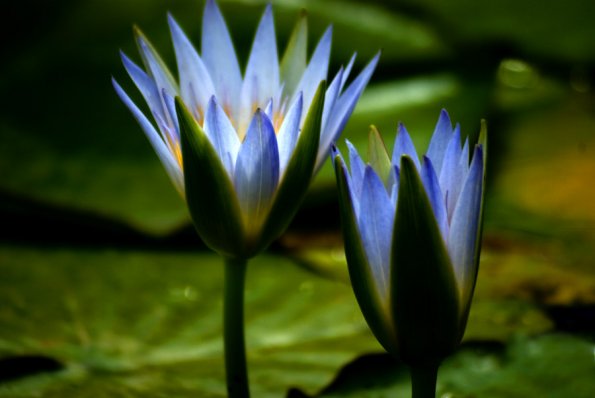 The  Blue lotus or water lily  was sacred to the Egyptians and is a symbol of the sun of creation and re-birth. The flowers close at sunset sink under the water, at dawn they rise and open again to greet the day with azure color and sweet fragrance.

When prepared as a tea the flowers produce gold clear liquid that reminds one of melted amber. It creates a warm euphoric glow. The dried flowers can be smoked in blends or heated as incense. The aphrodesiac effect is enhanced by soaking the flowers in a glass of wine and this is thought to be the trational way they were used in ancient Egypt.

Blue Nile Lotus is thought to:

- Have a calming sedative effect

- Act as an Aphrodisiac for both men and women

Species name Nyphaea caerulea (also known as the Blue Lotus of the Nile).  It contains an anti-spasmotic called Nuciferin, and likely contains aporphine (NOT Apomorphine as earlier suggested). Dosage: Probably about 3-5 flowers, or about 5g. Method: Eat (put in capsuls; takes longer) or make Tea (use about 20-25oz of water to get maximum content). Soak in  wine (White or Red) at least over night.

Effects: The history of this species says that is appears to be a hypnotic sedative (sort of like the Cannabis of ancient Egypt).  Actually, it is a pretty good sedative with a mild, opiod like feeling .

A literature search will very quickly show that W. A. Emboden has been writing about this narcotic plant and its relation to ancient Egypt, in several journals since at least 1978. Emboden, W. A. (1978) The sacred narcotic lily of the Nile: Nymphaea caerulea. Nuciferine, the drug, is known as an antispasmodic and a common constituent of plants in the Nymphaea genus. A Medline search will demonstrate this.

Contemporary reference to the role of water lilies and mandrakes (Nymphaea and Mandragora, respectively) in ancient Egyptian healing, and subsequent research on the iconography of the water lily in Mayan shamanistic ritual, suggest the possible importance of these plants as adjuncts to shamanistic healing in dynastic Egypt. Although the usual interpretation of the water lily and the mandrake has been that of a part of ritual mourning, the present article revises this notion. Based on an extensive review of these two powerful narcotic (i.e., hypnotic) plants in iconography and ritual, it is argued that the dynastic Egyptians had developed a form of shamanistic trance induced by these two plants and used it in medicine as well as healing rituals. Analysis of the ritual and sacred iconography of dynastic Egypt, as seen on stelae, in magical papyri, and on vessels, indicates that these people possessed a profound knowledge of plant lore and altered states of consciousness. The abundant data indicate that the shamanistic priest, who was highly placed in the stratified society, guided the souls of the living and dead, provided for the transmutation of souls into other bodies and the personification of plants as possessed by human spirits, as well as performing other shamanistic activities. 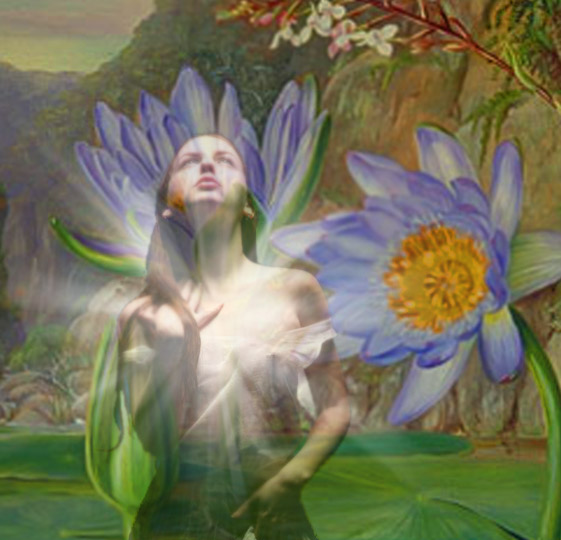 Called a 'lotus', the depictions of the floral symbol of Upper Egypt is actually known as a Nymphaea caerulea which is actually known today to be a water lily. This flower, along with the papyrus flower, was shown throughout Egypt in tombs and temples to symbolize the union of Upper and Lower Egypt, but the blue water lily had a much deeper significance to the Egyptian people.

On Nefertum, Egyptian God of the Lotus and of healing perfumes -

The Egyptians saw that the blue water lily opened up each morning, seeing the intense golden center set against the blue petals, seemingly an imitation of the sky that would greet the sun, releasing sweet perfume. Each afternoon, they would close again only to open again each day. The flower was therefor firmly linked with the rising and the setting of the sun, and thus to the sun god and the story of creation. The religious significance of the flower was great - many columns of the Egyptian temples had water lily capitals crowning them.

I am he who rises and lights up wall after wall, each thing in succession. There will not be a day that lacks its owed illumination. Pass on, O creatures, pass on, O world! Listen! I have ordered you to! I am the cosmic water lily that rose shining from Nun's black primordial waters, and my mother is Nut, the night sky. O you who made me, I have arrived, I am the great ruler of Yesterday, the power of command is in my hand.

- The Book of the Dead

The god of the blue water lily was Nefertem, a god not just linked to the sun but to beautification and healing. It was he who brought a water lily to the sun god Ra, to help ease the suffering of his aging body. The perfume of this flower was not only pleasing to the Egyptians, but they saw it as healing as well. Scenes show women holding the water lily and people being offered the flower at parties, smelling its divine fragrance. Some people today believe that the Egyptians used this plant as a narcotic both for its healing qualities and as a recreational drug when soaked in wine, though this is a hotly debated topic. 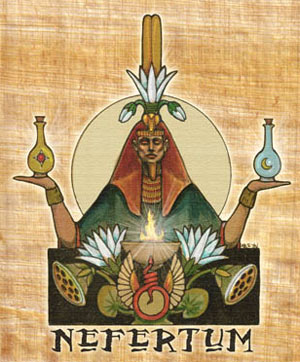 Contemporary reference to the role of water lilies and mandrakes (Nymphaea and Mandragora, respectively) in ancient Egyptian healing ... suggest the possible importance of these plants as adjuncts to shamanistic healing in dynastic Egypt. Although the usual interpretation of the water lily and the mandrake has been that of a part of ritual mourning ... it is argued that the dynastic Egyptians had developed a form of shamanistic trance induced by these two plants and used it in medicine as well as healing rituals. Analysis of the ritual and sacred iconography of dynastic Egypt, as seen on stelae, in magical papyri, and on vessels, indicates that these people possessed a profound knowledge of plant lore and altered states of consciousness. The abundant data indicate that the shamanistic priest, who was highly placed in the stratified society, guided the souls of the living and dead, provided for the transmutation of souls into other bodies and the personification of plants as possessed by human spirits, as well as performing other shamanistic activities.

-- The Sacred Journey in Dynastic Egypt: Shamanistic Trance in the Context of the Narcotic Water Lily and the Mandrake, Dr William Emboden 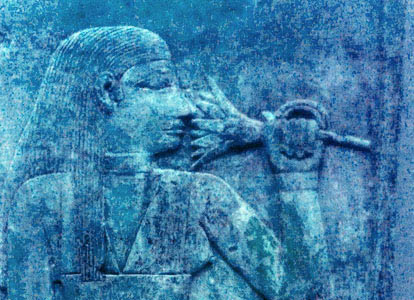 In The Mystery of the Cocaine Mummies Rosalie David ('Keeper of Egyptology, Manchester Museum') says that "we see many scenes of individuals holding a cup and dropping a water lily flower into the cup which contained wine". The assertion by Dr Andrew Sherratt, based on these depictions, is that he believes that when the flower was infused with wine, that the chemical content might change and become the ancient Egyptian party drug or a shamanistic aid.

The lilies were flown from Cairo to England, and nineteen of them opened after the sun came out. The flowers were soaked in the wine, and after a few days, two volunteers - who claimed to know nothing about ancient Egypt - drank the lily-wine. 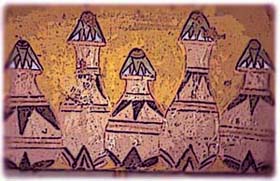 And I will say to Ptah, Lord of Truth:

Give me my fair one tonight."

The god Ptah is its tuft of reeds,

The goddess Sekhmet is its bouquet of flowers,

The goddess Yadyt is its water lily bud,

The god Nefertum is its opened water lily.

My love will be happy!

The dawn illuminates her beauty.

Qedeshet, the Syrian love goddess who the Egyptians married off to Min, was depicted as a naked woman who stood on the back of a lion, carrying snakes and water lily buds. The buds are likely linked with her role as a goddess of sexuality and fertility. Votive offerings to Hathor included bowls with water lily motifs, again alluding to fertility, the renewal of life and rebirth. (A water bowl was also the hieroglyph for a woman, which A.H. Gardiner in Egyptian Grammar believes to represent the vagina, linking the fertility sign of the water lily in the bowl to female fertility in this case.) The Egyptian idea of sexuality was identified with creation. Being a flower of creation, the flower became linked to human fertility and sexuality. The images of women holding the flower may be hinting at her ability to bear children or that she was sexually desirable, and images of men holding the flower may hint at his potency. It could also be a way to ensure that the person painted would be fertile - and sexy - in the afterlife.

When you look at its brilliance, your eyes become imbued with dynamic force. When you breath in, your nostrils dilate.

-- Horus, Talking about the Blue Water Lily, Graeco-Roman Temple of Horus at Edfu 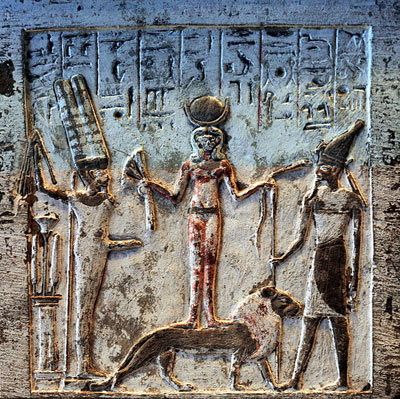 The flower wasn't just used at parties, but it was used at funerals. As with many symbols of fertility, the blue water lily was also symbolic of rebirth after death. Tutankhamen's innermost gold coffin had blue water lily petals scattered over it along with a few other floral tributes. The Egyptians looked forward to thei souls coming to life "like a water lily reopening", thinking that the deceased died as the water lily closed awaiting opening with the morning sun. The

Making the Transformation into the Water Lily

The Osiris Ani, whose word is truth, saith:

One of the items found in Tutankhamen's tomb is that of the boy's head emerging from the water lily. There are depictions of this in the

The Book of the Dead with the face of the deceased. It is probably a symbolic likening of the deceased to the creation myth as the water lily opened to reveal the sun god for the first time, giving the deceased new life as the flower opens each morning. 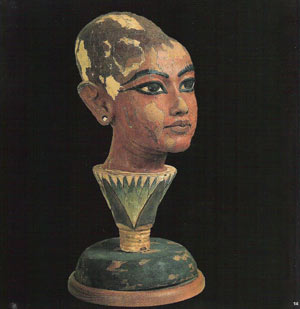 The blue water lily was sacred to the ancient Egyptians, ornamental and sweet smelling. People who have had the pleasure described the smell as being similar to that of a hyacinth, a loquat and even of a banana. Whatever the fragrance is like, the Egyptians loved this plant that represented the sun and rebirth. It was presented at parties, and took on a sacred significance at death. There is little wonder that it became the floral symbol of Upper Egypt, and a flower enjoyed by all people throughout Egyptian history.

( Article derived from many sources)