We are so pleased to have found this wonderful Benzoin Sumatra, it is pure resin, golden in color. The pieces are called "Almonds"  and when heated the aroma is very smooth and sweet. Not as biting as Siam Benzoin (bright orange type). Used on the heater you get a wonderful experience and adds warm sweetness to any blend.

When the pieces are broken inside it looks exactly like it smells....like Toffee. (see photo below)

We recommend heating all types of Benzoin on an Electric Heater, burning on charcoal produces a sweet but acrid , copious smoke

Styrax Benzoin Sumatra has a wonderful cinnamic /sweet caramel /vanilla scent and is used in incense and perfumery around the world.

Benzoin is a classic fixative,  it slows the dispersion of essential oils and other fragrance materials into the air. This means that scents will last longer in a blend containing Benzoin. It creates the perfect "ground" to build scent combinations. Powders easily and blends well with almost everything.

It is widely used as incense in the middle east and in India.  The resin is also used in blended types of Japanese incense, Indian incense, Chinese incense, and Papier d'Arménie as well as incense sticks. When called sambrani or sambraani, it is a popular Indian incense used to scent and treat hair and prevent infections.

Also called gum benzoin or gum benjamin, but "gum" is incorrect as benzoin is not a water-soluble polysaccharide. Its name came via the Italian from the Arabic luban jawi ("frankincense from Java"), because it was brought from Indonesia. The Catalan traders, who bought luban jawi from moorish traders, modified the word by changing a to e and omitting the lu to benjawi. Italians further changed it into benjuì, and in Latin, it became ultimately known as benzoë.

From early records, we know benzoin resin was imported by the Chinese and the ancient Egyptians via the Red Sea. Papyrus records indicate that it was ground into powder and mixed with other substances such as pine, juniper, galbanum, cypress and labdanum into incense, and often made into cones that were placed on the heads of Egyptian dancers. Interestingly, the ancient Greeks and Romans did not appear to use benzoin as a medicine, reserving its use predominantly for incense purposes.

In the ancient Malayan culture benzoin was used as an incense and fumigation to drive away evil spirits and also for ceremonial purposes. Ancient transcripts show that the Greeks and Romans used benzoin over 2000 years ago, although interestingly they did not appear to use it as a medicine, reserving its use predominantly for incense purposes. The Arab traders called benzoin ‘luban-jawi’ which means ‘incense from Java’.

In England, its use was first recorded between the 15th and 16th centuries when it was brought over by spice traders and used in powdered form to make dry perfumes, one of which was worn by Queen Elizabeth I. In later years, the medical profession of the day began to expand the boundaries between perfume and medicine and benzoin began to take a more therapeutic role. The resin was burned to relieve bronchitis and coughs, and eventually modified into a tincture that became popular in the apothecaries. 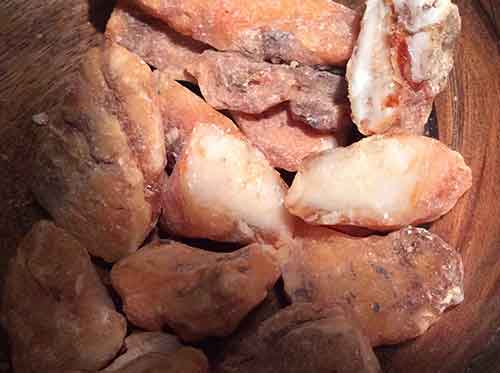