20  Camphor Pellets and guide for use in Worship and Ritual.

- Place Camphor pellets in heatproof bowl or censer, preferably one with a wooden handle (like  Mermade’s “Ceremonial Censer”. Light them with a match or lighter. They will  Flame for several minutes and then go out on their own. Pellets can also be floated while burning in a bowl of water. This creates “Holy Water” to use in ceremony. Light pellet then pick it up with Tongs or tweezers and place gently on the surface of the water. It is a very beautiful sight as the flames dance upon the water."

We recommend using our Ceremonial Censer for burning these camphor pellets

During Arati (Hindu ritual), burning camphor held in a small censer is "waved before the deity to symbolize the dissolution of the ego. "

Camphor is considered highly purifying and very sacred, and it is used to represent the dissolution of the ego since it burns completely without leaving any trace. When burned it emits a sweet, strong fragrance, which symbolizes how we too should sacrifice ourselves to serve society and in the process spread the perfume of love and happiness to all.

Puja is a form of worship which is performed to purify the mind, to express devotion, and to connect with the Divine.

It can be used by all to purify and bless with light and scent.
(See Chalice of Light article for more info on Arati)

This camphor is for ritual and religious purposes only, not to be ingested.

Camphor pellets are sometimes lit and set to float still burning upon the surface of a vessel of water, thus creating "holy water" or water that has been purified for sacred use in ceremony.

For a lovely video of Ammachi doing this ceremony and more on ceremonial camphor burning go to:
On Blessing of Holy Water


Hindu Practice
Aarti is generally performed two to five times daily, and usually at the end of a puja or bhajan session. It is performed during almost all Hindu ceremonies and occasions. It involves the circulating of an 'Aarti plate' around a person or idol and is generally accompanied by the singing of songs in praise of that deva or person (many versions exist). In doing so, the plate itself is supposed to acquire the power of the deity. The priest circulates the plate to all those present. They cup their down-turned hands over the flame and then raise their palms to their forehead - the purificatory blessing, passed from the deva's image to the flame, has now been passed to the devotee.
The aarti plate is generally made of metal, usually silver, bronze or copper. On it must repose a lamp made of kneaded flour, mud or metal, filled with oil or ghee. A cotton wick is put into the oil and then lighted, or camphor is burnt instead. The plate also contains flowers, incense and akshata.
The purpose of performing arati is to ward off evil effects and the malefic influence of the 'evil eye'. Aarti is hence performed on people of high social or economic status; small children during various ceremonies; on people who are going on or are coming back from a long journey; on a bride and bridegroom when they enter their house for the first time; at harvest; on anything else of importance. It is also performed on newly acquired property, or before an important task.
It is believed that the idol of a deva too is susceptible to the evil eye, and needs regular arati, with the singing of special arati songs. These songs laud the glory of the deva and describe the benefits that one might gain by praying to them. Sometimes they also contain snippets of information on the life of the gods. Arati songs are particular to each deva. In most temples in India, arati is performed at least twice a day, after the ceremonial puja, which is the time when the largest number of devotees congregates. 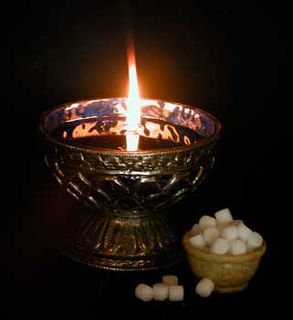 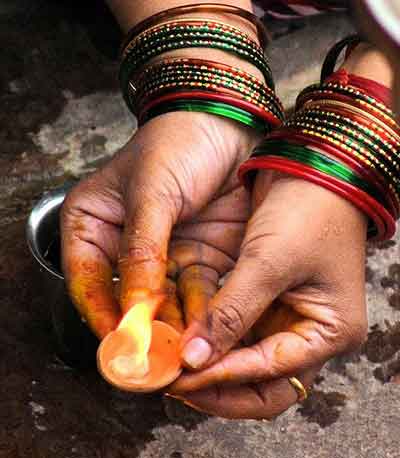